These intrepid journalists have been the world’s eyes and ears, relaying heart-wrenching details and providing agonizing visuals of the Russian offensive. A brave team in Mariupol spent 20 days in the besieged city, documenting the reality of life there. Their photos of the aftermath of the shelling of a maternity hospital — with pregnant women carried out on stretchers — became defining images of the Russian assault. As the only international journalists on the ground amid a communications blackout, an AP video journalist wrote in a harrowing first-person account that “if not for us, there would be nothing.” 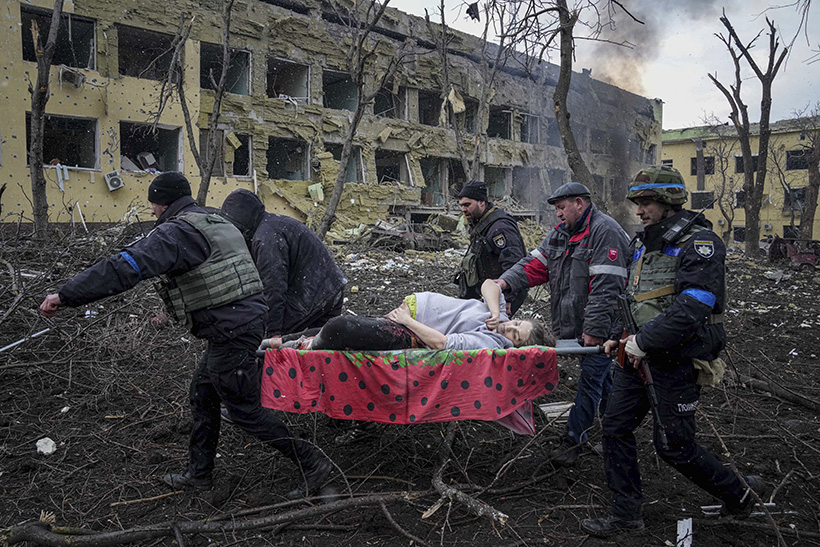 Protecting our teams in Ukraine, Russia and across the globe remains AP’s top priority as we continue to report from some of the world’s most dangerous places, especially during a global pandemic.

In Gaza in 2021 we documented the 11-day war between Israel and Gaza’s ruling Hamas militant group. An Israeli airstrike destroyed the building housing our own bureau in May, and our journalists kept telling the story. In the chaotic moments when AP’s team evacuated the building, they also sprung into action, grabbing their gear and rushing to a nearby tower to capture on live video the building crumbling. They then went on to cover the conflict. The loss of our bureau took an intense personal toll on our staff, but they persevered to report the facts.

Last year brought with it the largest evacuation of AP staff in modern history when the Taliban again rose to power in Afghanistan. Our team in Kabul and beyond broke multiple stories during the U.S. withdrawal: 12 members of the U.S. military killed in a strike outside the Kabul airport; two U.S. lawmakers flying unannounced to Kabul, prompting fury; and the launch of a U.S. drone strike against the Islamic State.

In Ethiopia in 2021, a string of AP exclusives revealed disturbing accounts of killings committed by both Ethiopian and Eritrean troops in the Tigray region — a province shrouded in secrecy since the start of the conflict. This work exposed a major humanitarian disaster. AP-accredited freelancer Amir Aman Kiyaro was detained in Ethiopia for four months because of his journalism. He was released on bail, but the investigation into him continues.

In Myanmar, we produced strong and exclusive coverage of the aftermath of the country’s military coup, even after AP journalist Thein Zaw was arrested while covering a protest and held for over three weeks in the country’s notorious Insein Prison. Through resourceful reporting and fact-checking, AP uncovered the Myanmar military’s use of systematic torture, prompting the U.S. State Department to demand an investigation and the United Nations’ top expert on human rights in Myanmar to call for international pressure on the military. Another reporting team used interviews, social media, satellite imagery and data to expose a campaign of massacres conducted by the military, and a unique visual investigation revealed the junta was not only shooting at civilians but also going out of their way to mutilate and drag bodies in the street as a way of terrorizing people. 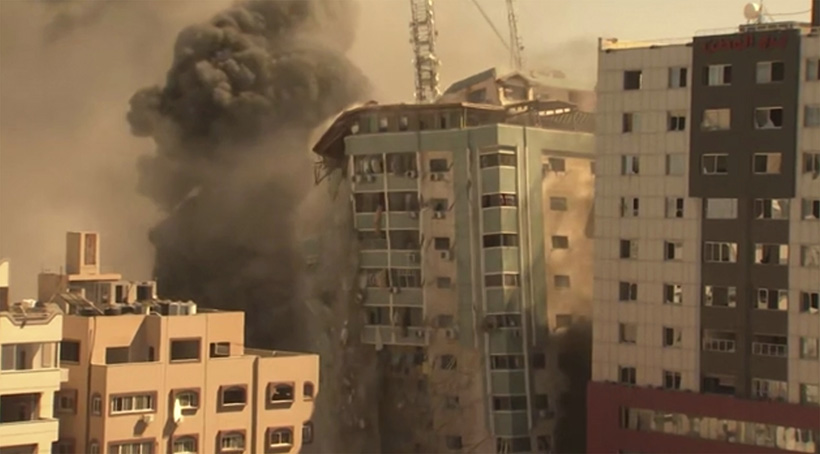 A building housing various international media, including The Associated Press, collapses after an Israeli airstrike, May 15, 2021 in Gaza City.
(AP PHOTO) 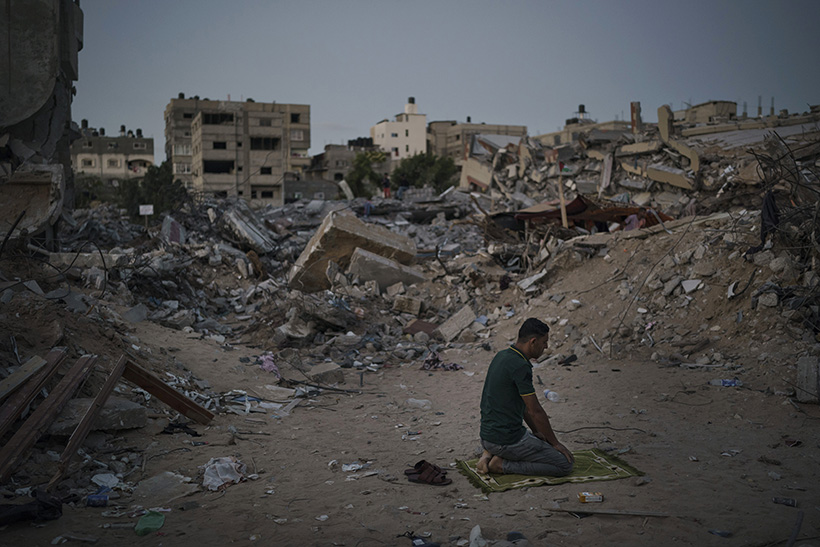 A Palestinian man prays at dusk next to rubble of his family home, destroyed by an airstrike in Beit Lahia, northern Gaza Strip, June 4, 2021.
(AP PHOTO / FELIPE DANA) 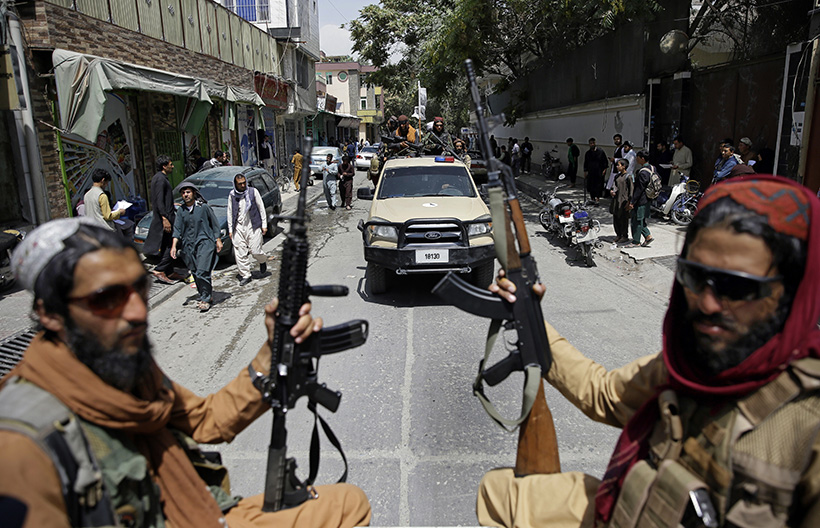 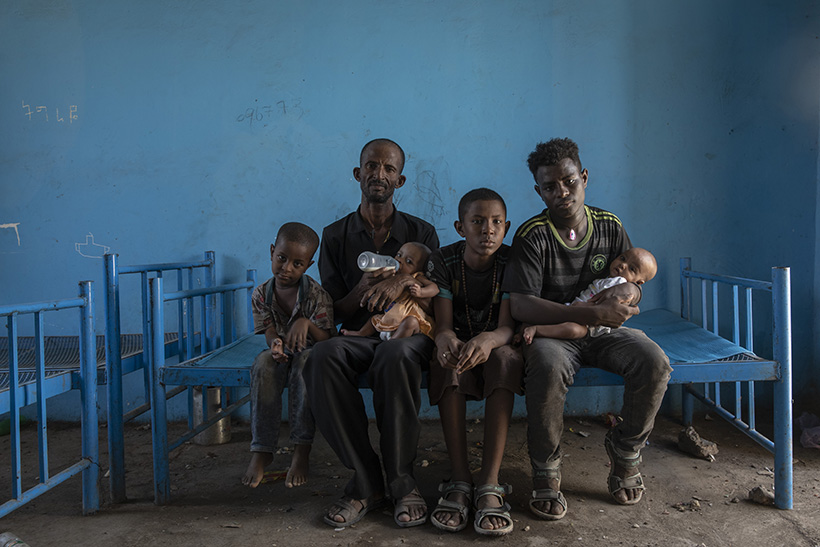 Tigrayan refugee Abraha Kinfe Gebremariam, 40, second from left, sits for a photo with his sons, Micheale, 5, left, and Daniel, 11, with his 19-year-old brother-in-law, Goytom Tsegay, far right. Abraha holds his 4-month-old daughter Turfu in his lap, and her twin sister is held by Tsegay, in the family’s shelter in Hamdayet, eastern Sudan, near the border with Ethiopia, March 23, 2021.
(AP PHOTO / NARIMAN EL-MOFTY) 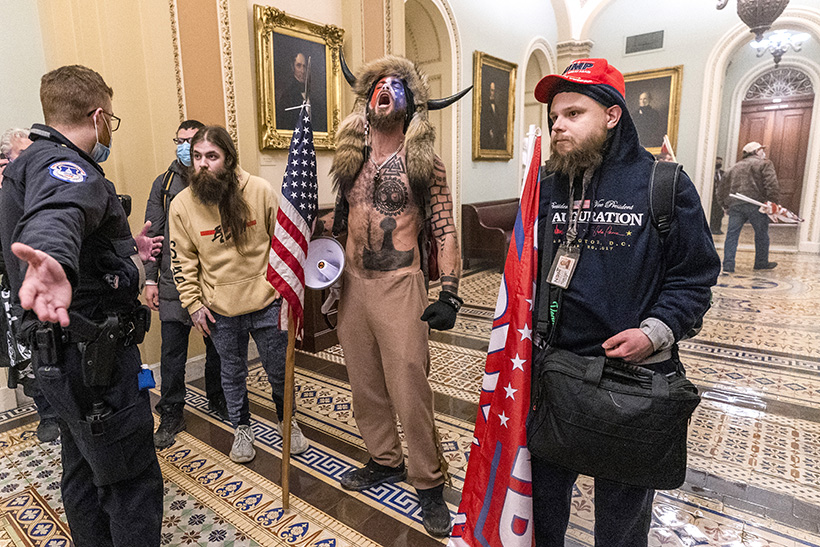 Supporters of President Donald Trump are confronted by Capitol police officers outside the Senate Chamber inside the Capitol, Jan. 6, 2021, in Washington.
(AP PHOTO / MANUEL BALCE CENETA) 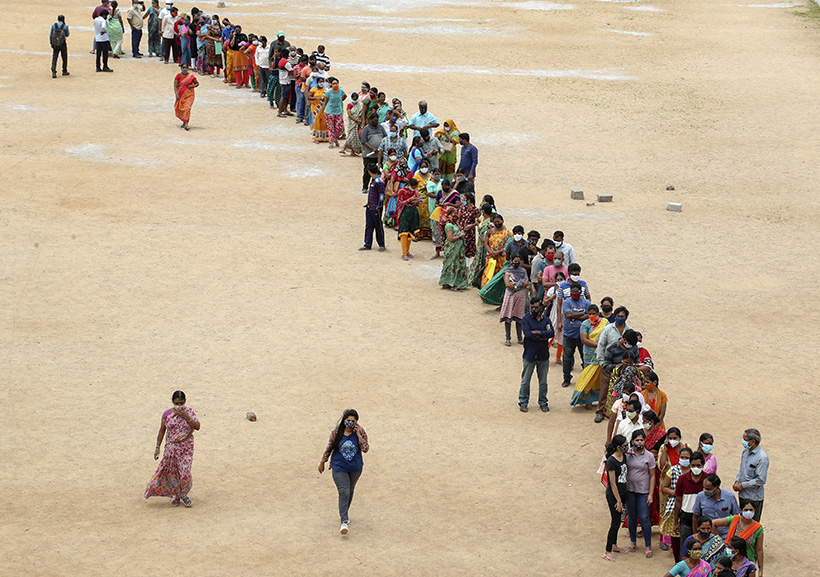 Hundreds of people line up to receive their second dose of vaccine against the coronavirus at the municipal ground in Hyderabad, India, July 29, 2021.
(AP PHOTO / MAHESH KUMARA) 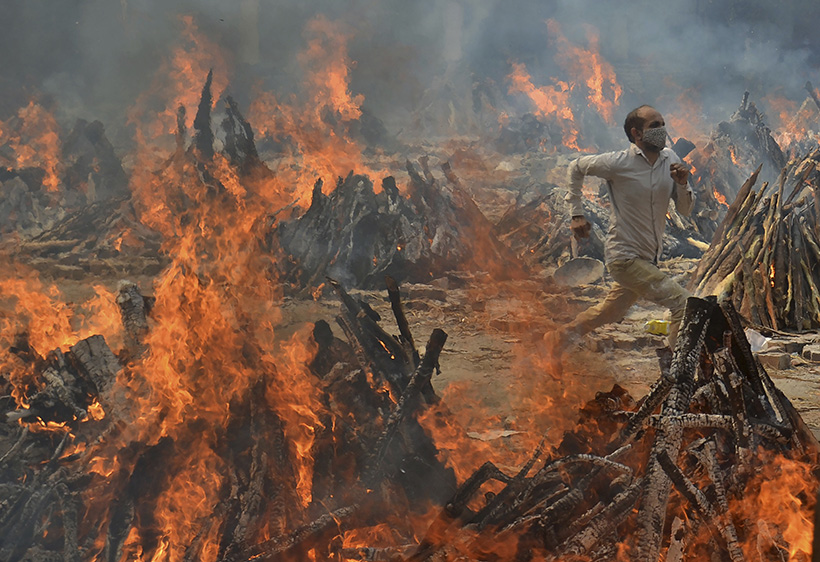 A man runs to escape heat emitting from the multiple funeral pyres of COVID-19 victims at a crematorium in the outskirts of New Delhi, April 29, 2021.
(AP PHOTO / AMIT SHARMA) 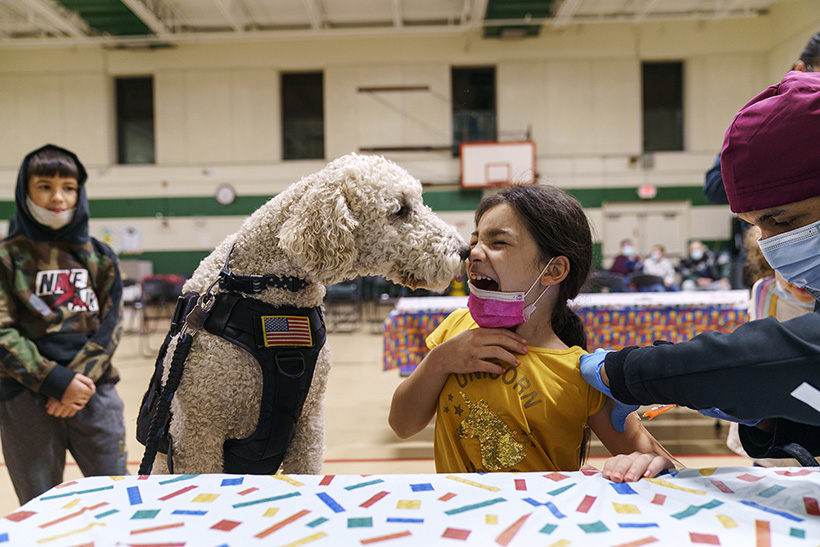 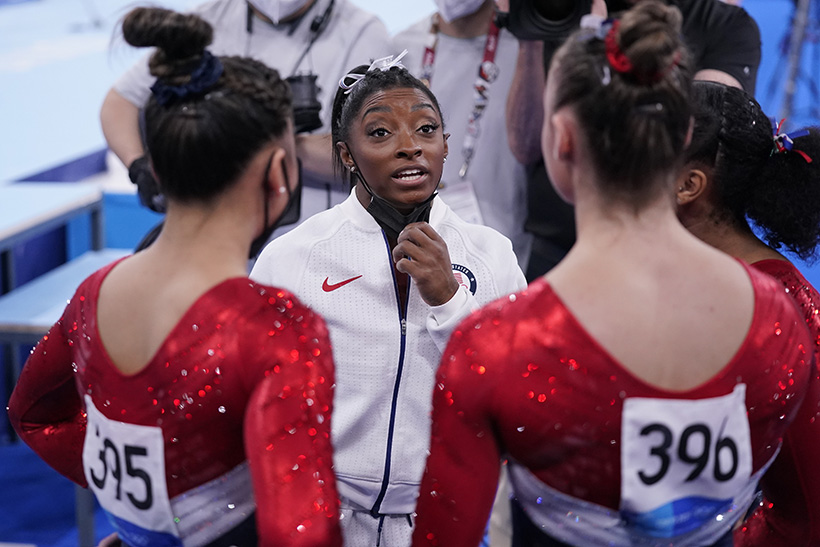 Simone Biles, of the United States, talks to teammates during the artistic women's team final at the 2020 Summer Olympics, July 27, 2021, in Tokyo.
(AP PHOTO / GREGORY BULL) 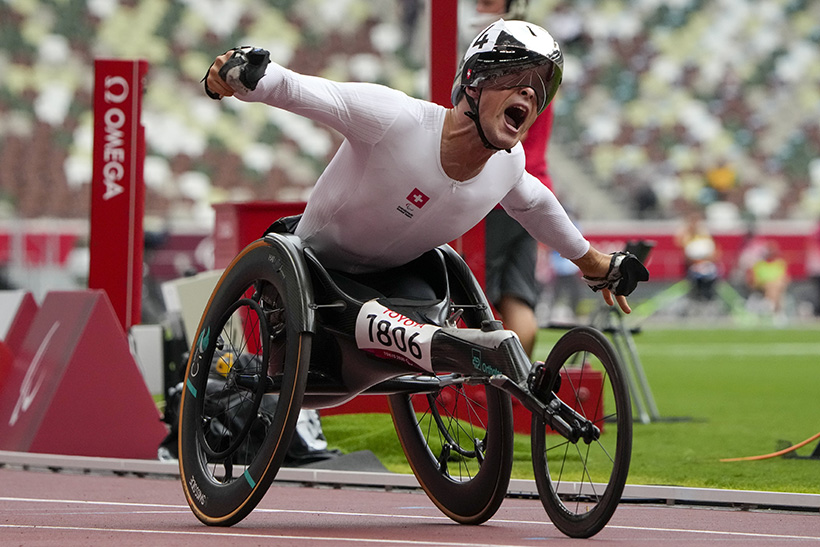 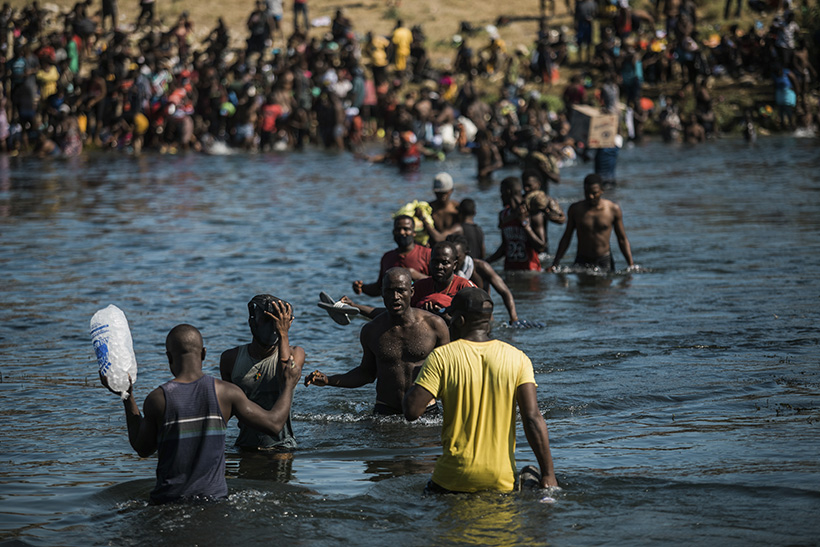 Migrants wade across the Rio Grande from Del Rio, Texas, to Ciudad Acuña, Mexico, to shop for food and supplies before returning back to the U.S. side of the border, Sept. 19, 2021.
(AP PHOTO / FELIX MARQUEZ) 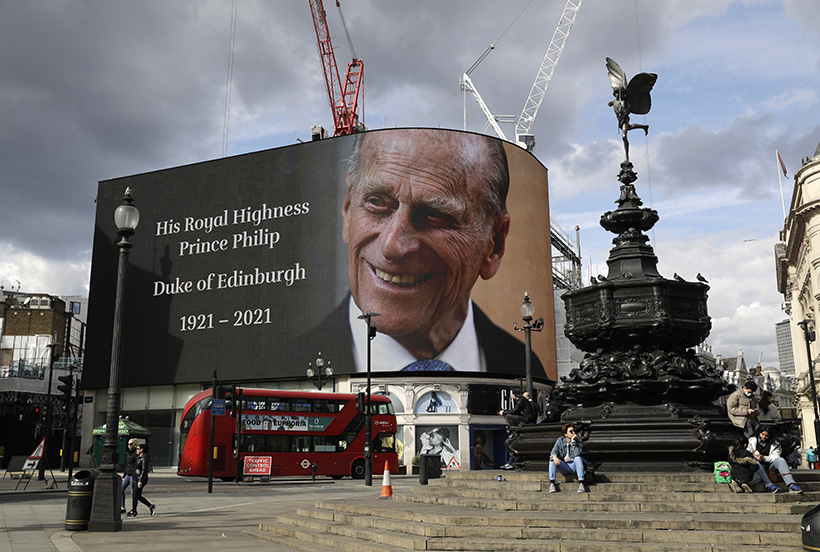 A tribute to Britain’s Prince Philip, featuring a 2015 photo of the prince by AP staff photographer Matt Dunham, is displayed on a large screen at Piccadilly Circus in London, April 9, 2021, after Buckingham Palace announced the death of the prince at age 99.
(AP PHOTO / MATT DUNHAM) 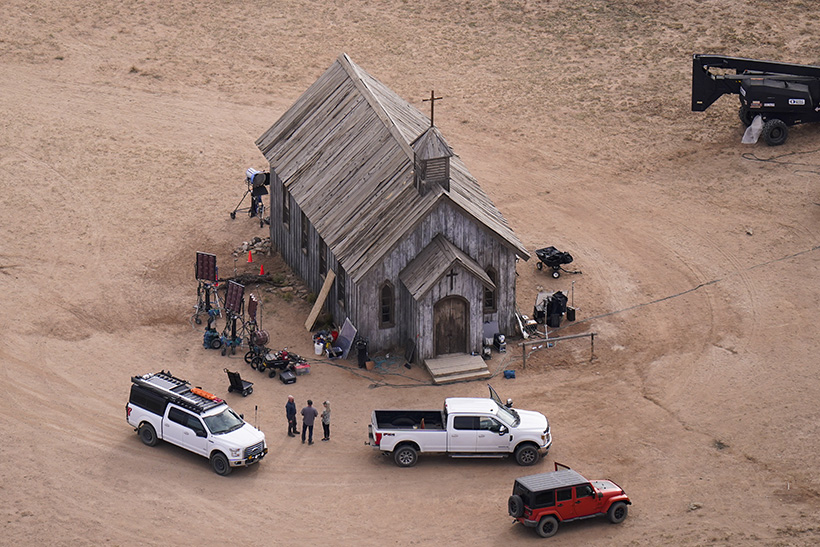 This aerial photo shows the Bonanza Creek Ranch in Santa Fe, N.M., Oct. 23, 2021, two days after actor Alec Baldwin fired a prop gun on the film set, killing the cinematographer and wounding the director of a Western being filmed at the ranch.
(AP PHOTO / JAE C. HONG) 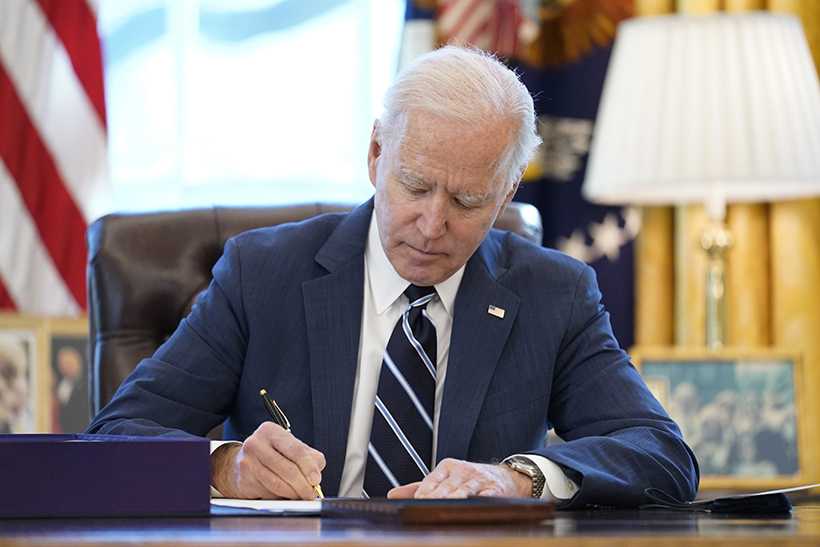 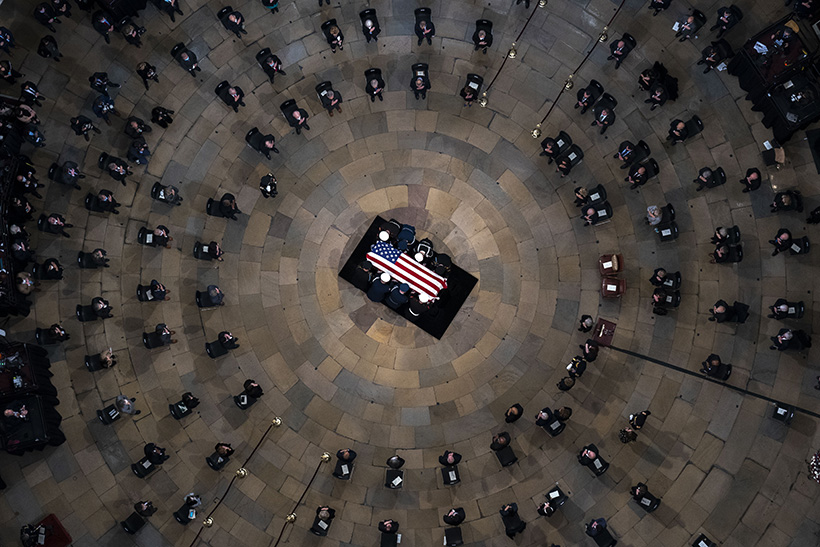 The casket of former Sen. Bob Dole, R-Kan., arrives in the Rotunda of the U.S. Capitol, where he will lie in state, Dec. 9, 2021, on Capitol Hill in Washington.
(AP PHOTO / ANDREW HARNIK) 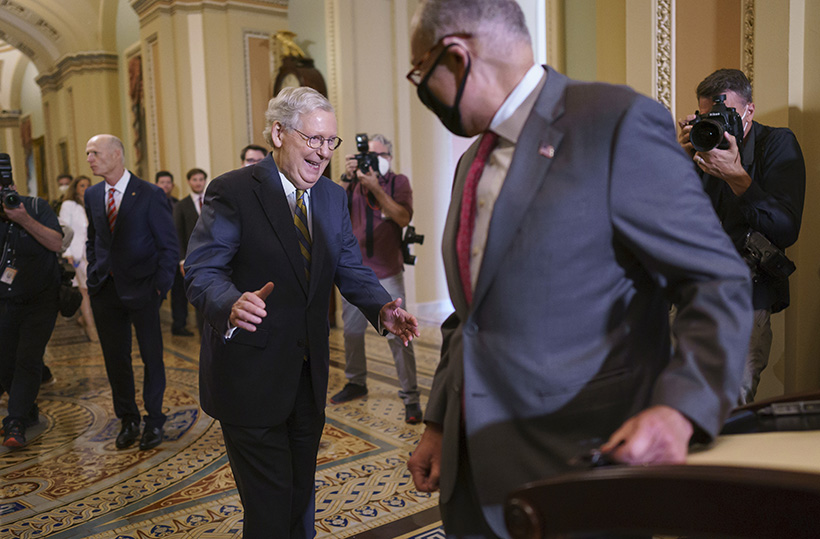 Senate Democratic Leader Chuck Schumer, of New York, and Senate Republican Leader Mitch McConnell, of Kentucky, left rear, enjoy a brief bipartisan moment when they both arrived at the same time to speak to reporters about progress on an infrastructure bill, at the Capitol in Washington, Aug. 3, 2021.
(AP PHOTO / J. SCOTT APPLEWHITE) 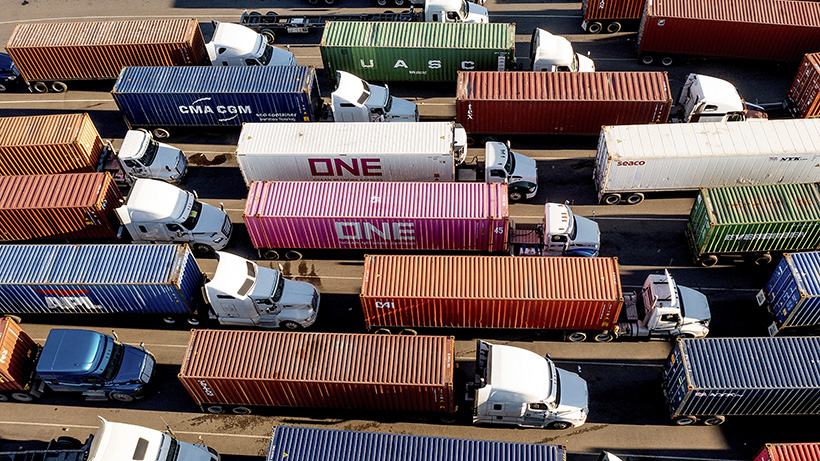 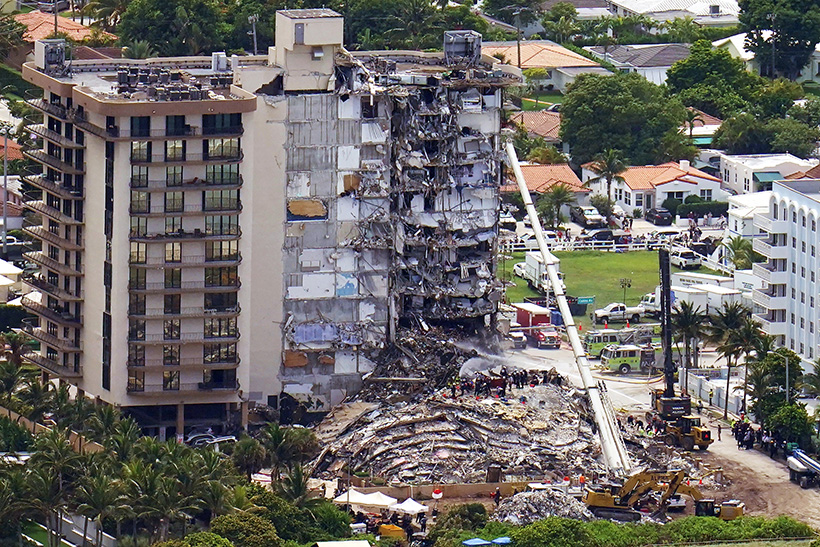 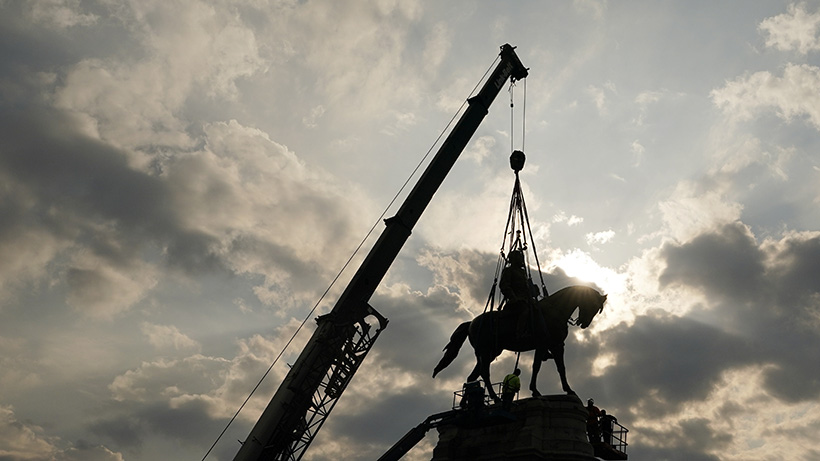 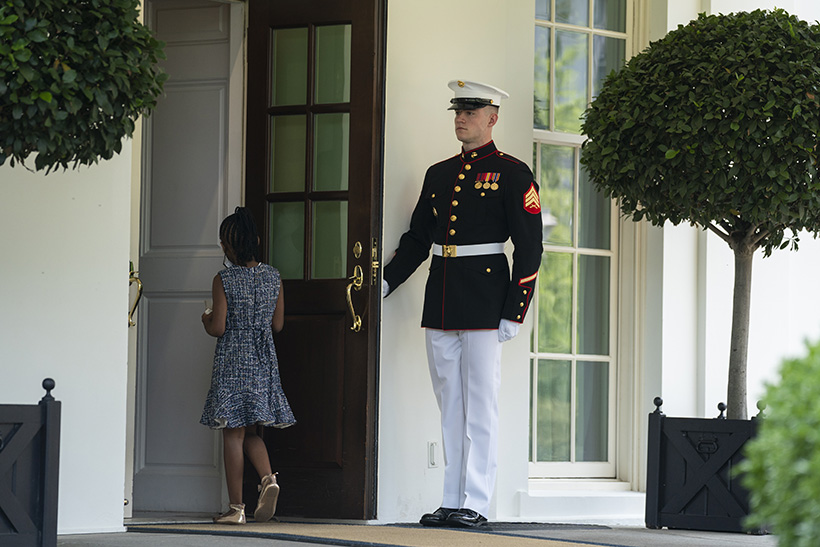 A Marine holds the door as Gianna Floyd, the daughter of George Floyd, walks into the White House, May 25, 2021, in Washington.
(AP PHOTO / EVAN VUCCI)

At the U.S. Capitol on Jan. 6, AP journalists, themselves at risk, delivered searing images and a nonstop stream of breaking news during the unprecedented insurrection challenging Joe Biden’s defeat of Donald Trump. AP revealed that top military officials feared insider attacks from National Guardsmen activated to protect the inauguration of President Biden, and that the concerns prompted the FBI to vet all 25,000 troops sent to Washington. As the year went on AP countered misinformation surrounding both the events of Jan. 6 and claims of election fraud with the facts.

In all of these cases, AP journalists on the front lines showed the world what was happening, despite great personal risk. Of course the safety of all our staff remains paramount as we tell every story, especially with regard to protecting them from the global pandemic.

Visuals have been critical to telling these stories and so many others. Our photo and video journalists continue to produce poignant, striking and impactful images that rocket around the world. Their work earned AP its 55th and 56th Pulitzer Prizes in 2021 for gripping photography showing explosive protests over racial injustice and the COVID-19 pandemic’s toll on the elderly in Spain. Last year AP produced over 1 million photos from all corners of the globe, in many cases using innovative techniques including drones and robotic cameras, which we deployed at the Tokyo Summer Olympics and Beijing Winter Games.

Innovation and collaboration remained crucial to AP’s success in the second year of the global pandemic. AP Global Media Services, our production arm, produced and livestreamed auctions for Sotheby’s, which had taken its auctions online due to COVID. We doubled down on our efforts to support our members and local news as a whole, introducing localization guides to help newsrooms make major stories local. We also expanded AP StoryShare, the platform that allows local outlets to share their content with one another, and now have 11 networks up and running. With support from the John S. and James L. Knight Foundation, we surveyed local newsrooms on their use of and need for artificial intelligence and automation and have used the findings to inform a free course for local newsrooms that launched this month.

We also expanded our work with foundations and nonprofits, using philanthropic grants to examine in depth traditionally under-covered areas, such as health and science, religion, and challenges to democracy worldwide. We laid the groundwork for our flagship climate reporting initiative, which will infuse the global media landscape with a new stream of quality climate journalism through both AP content and in-depth training and collaboration with our customers. Of course in all cases we maintain our editorial independence; our commitment to AP standards never wavers.

All of this crucial work continues in 2022 — a midterm election year in the U.S. As we have since 1848, AP will count the vote and report the results quickly and accurately, delivering all-formats election coverage — and so much more — to our customers around the world.

Here are highlights from 2021:

As we enter 2022, AP is in strong financial shape. There is a lot to be excited about at The Associated Press, where our customers can count on us to deliver the services they rely on and, above all else, report the facts, as we have for 175 years.

A look at 2021 through AP stats and figures