While much of the world remains under orders to stay home, AP journalists continue to report from the field, telling stories of heroism at hospitals, tragedy in tight-knit communities and acts of kindness that are connecting people in this extraordinary time. Beyond the health crisis, staffers are covering the economic fallout of the outbreak and the impact broadly to society. This work has never been more important.

From portraits of health care workers on Italy’s front lines to exclusive reporting on the first test of a coronavirus vaccine in Washington state, AP is harnessing its global footprint to tell stories no one else can. Our journalists haven’t missed a beat. They continue to overcome obstacles to cover this pandemic quickly, accurately and without bias, providing essential analysis and critical context. 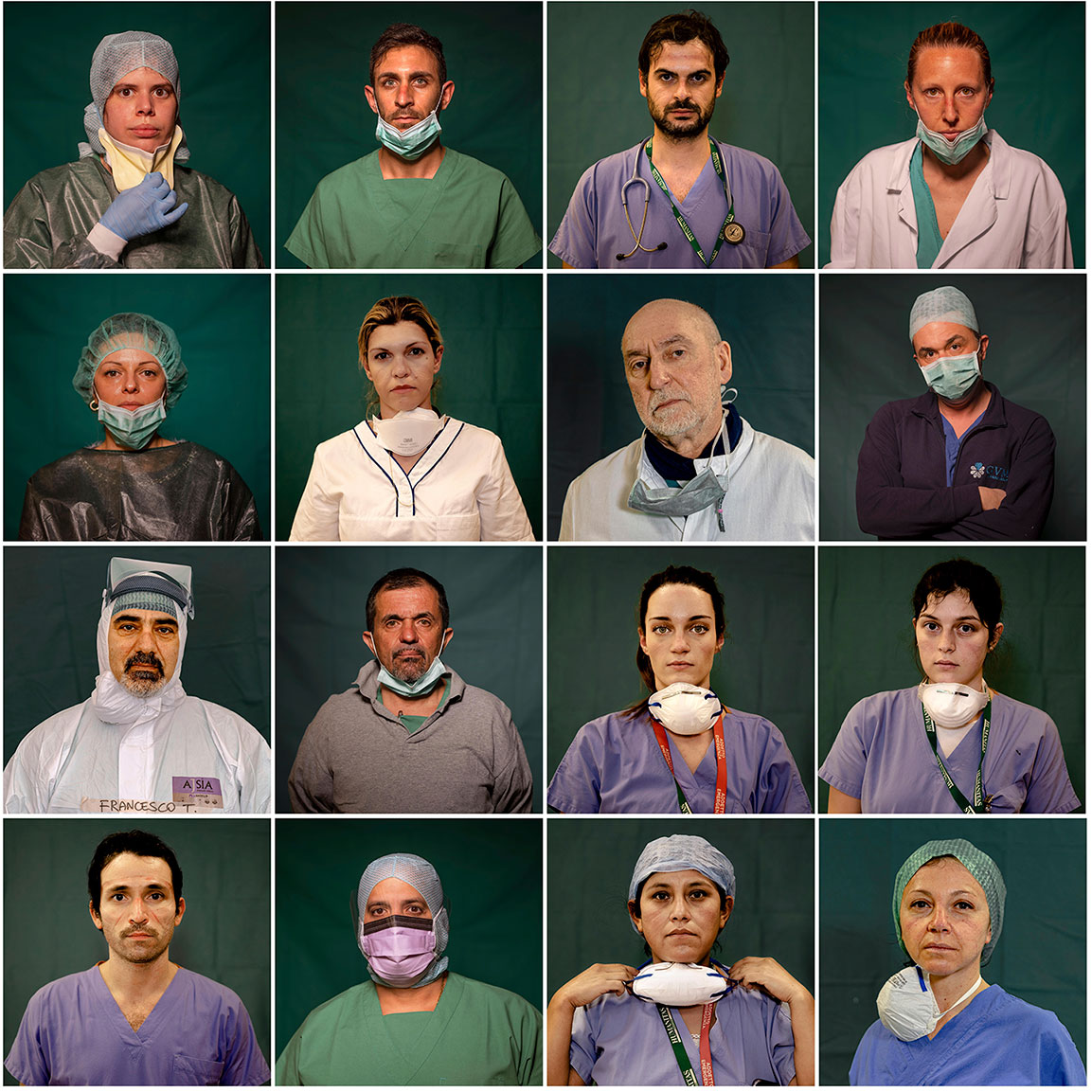 In these challenging times, AP is at its best. We will not step back; we will step up.

AP journalists rose to the occasion many times in 2019, advancing the power of facts to keep the world informed and hold the powerful accountable in the face of increasing divisiveness and attempts to deceive.

With more live feeds than ever, we gave people a chance to see first-hand how major breaking news events, like massive protests from Hong Kong to Lebanon to Venezuela, were unfolding across the globe. And through groundbreaking innovations and collaborations, the AP solidified its role as an industry leader and driving force to expand the breadth of global coverage while helping to keep local journalism alive.

From the impeachment of President Donald Trump to the rippling impacts of climate change across the globe, AP’s award-winning news report was as deep as it was wide. We brought to light numerous sexual harassment allegations against one of opera’s most powerful figures, chronicled deadly Easter Sunday bombings in Sri Lanka, broke new ground in the global opioid epidemic, and so much more.

With an eye toward the 2020 presidential election, AP’s national politics team provided insightful and exclusive coverage of a historic, massive field of Democratic hopefuls. As the race to the White House unfolds, AP is poised to deliver superb coverage across all 50 states and explain intricacies of the campaign and election to the world. AP VoteCast, our pioneering voter survey conducted by NORC at the University of Chicago, continues to take the pulse of the electorate. The poll captures the views of voters — not only who they voted for but why, providing rich texture and context in telling the story of Election Day.

Through collaboration and innovation, AP created a global religion team aimed at providing balanced, nuanced coverage of major world religions and laid plans to bolster our unrivaled 50-state footprint with an influx of over a dozen statehouse reporters. We achieved a milestone in underwater live broadcasting and developed a free toolkit that will make it easier for newsrooms and journalists to collaborate on data-driven journalism.

Throughout 2019, we provided deep, rich and distinctive content to unearth untold stories. Our exemplary and exclusive journalism included: 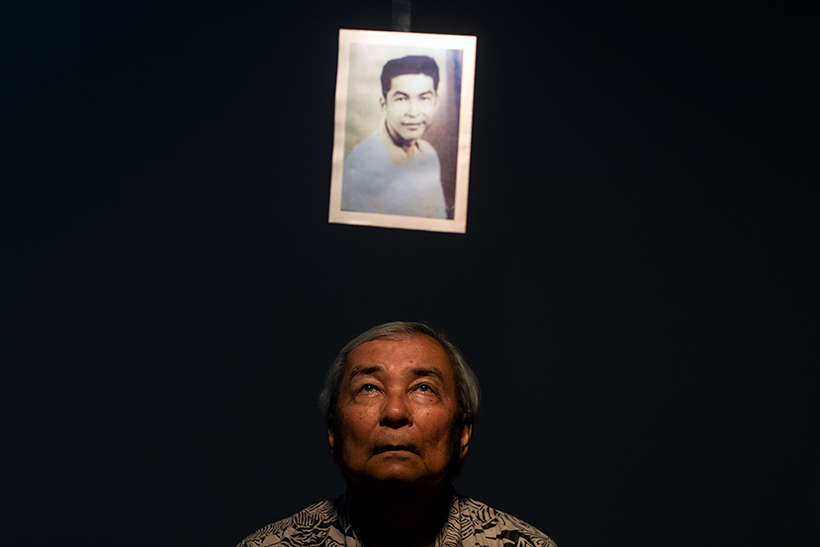 Leo Tudela, 75, looks up, in Hagatna, Guam, May 13, 2019, at a photo of himself when he was 13 years old, the age when he says he was sexually molested by a Catholic priest who was also a scoutmaster for the Boy Scouts of America. As part of “The Reckoning,” the AP’s series on abuse in the Catholic Church, AP revealed a culture of sexual abuse by clergy on Guam that was shielded by the U.S. territory’s former archbishop. AP PHOTO / DAVID GOLDMAN 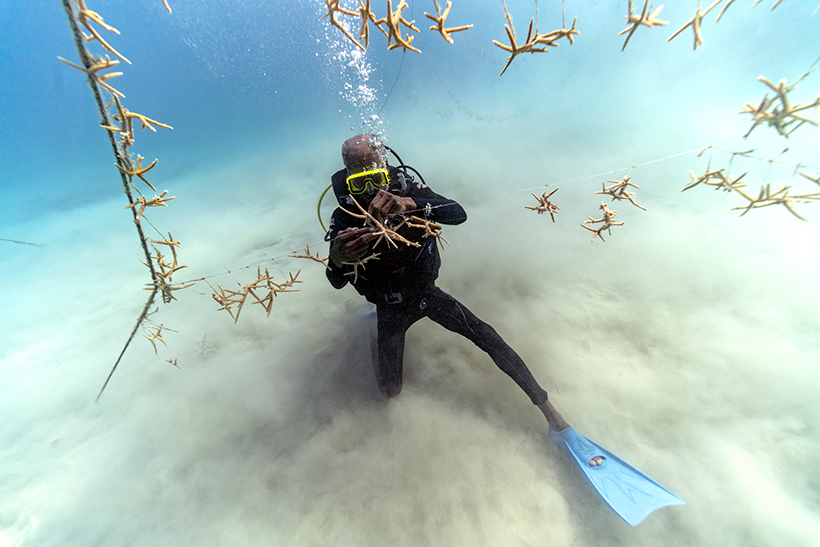 Diver Everton Simpson untangles lines of staghorn coral at a coral nursery inside the White River Fish Sanctuary in Ocho Rios, Jamaica, Feb. 11, 2019. AP’s 12-week series, “What Can Be Saved,” revealed heroic efforts being waged around the world to preserve and restore vital natural habitats in the face of global warming. AP PHOTO / DAVID J. PHILLIP 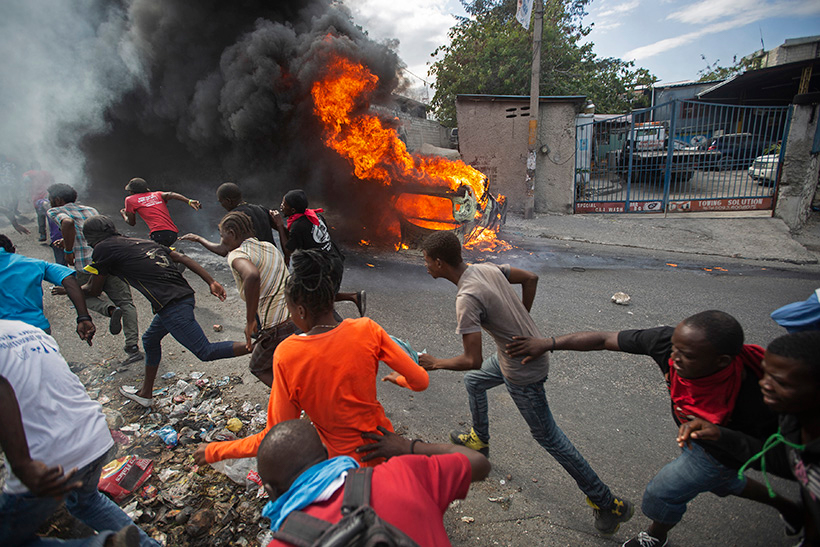 Demonstrators run away from police who were shooting in their direction, as a car burns during a protest demanding the resignation of Haitian President Jovenel Moise in Port-au-Prince, Haiti, Feb. 12, 2019. DIEU NALIO CHERY 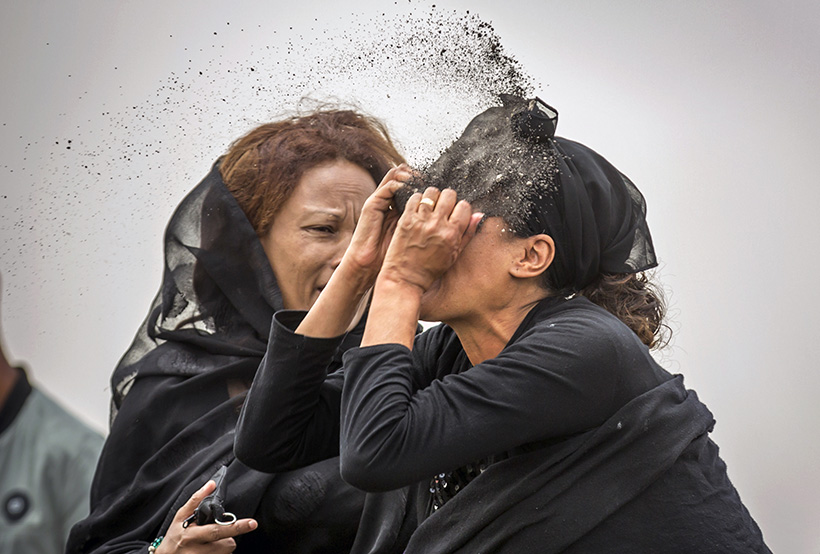 An Ethiopian relative of a crash victim throws dirt in her own face after realising that there is nothing physical left of her loved one, as she mourns at the scene where the Ethiopian Airlines Boeing 737 Max 8 crashed shortly after takeoff on Sunday killing all 157 on board, near Bishoftu, south-east of Addis Ababa, in Ethiopia, March 14, 2019. AP PHOTO / MULUGETA AYENE 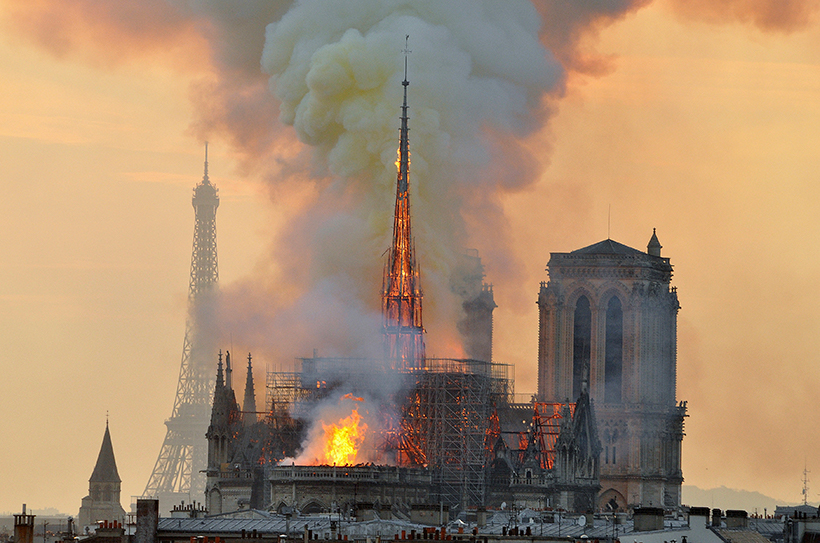 Smoke and flames rise around the spire of Notre Dame cathedral in Paris, April 15, 2019. The fire raged through the medieval cathedral for hours, destroying the spire and much of the roof, but largely spared the twin medieval bell towers and most of the cathedral’s priceless artifacts. AP PHOTO / THIERRY MALLET 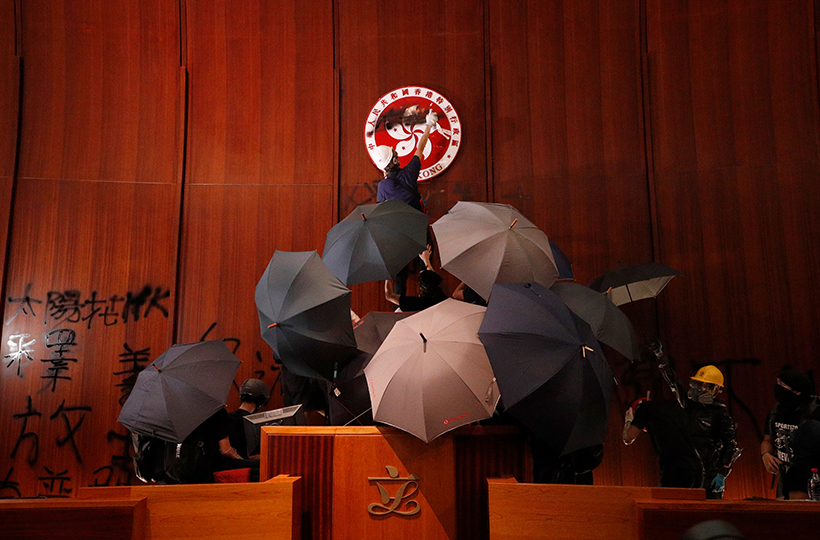 Protesters deface the Hong Kong logo in the Legislative Council chamber, July 1, 2019, during ongoing protests against the extradition bill that would allow Hong Kong to hand over fugitives to other jurisdictions, including mainland China. AP PHOTO / VINCENT YU 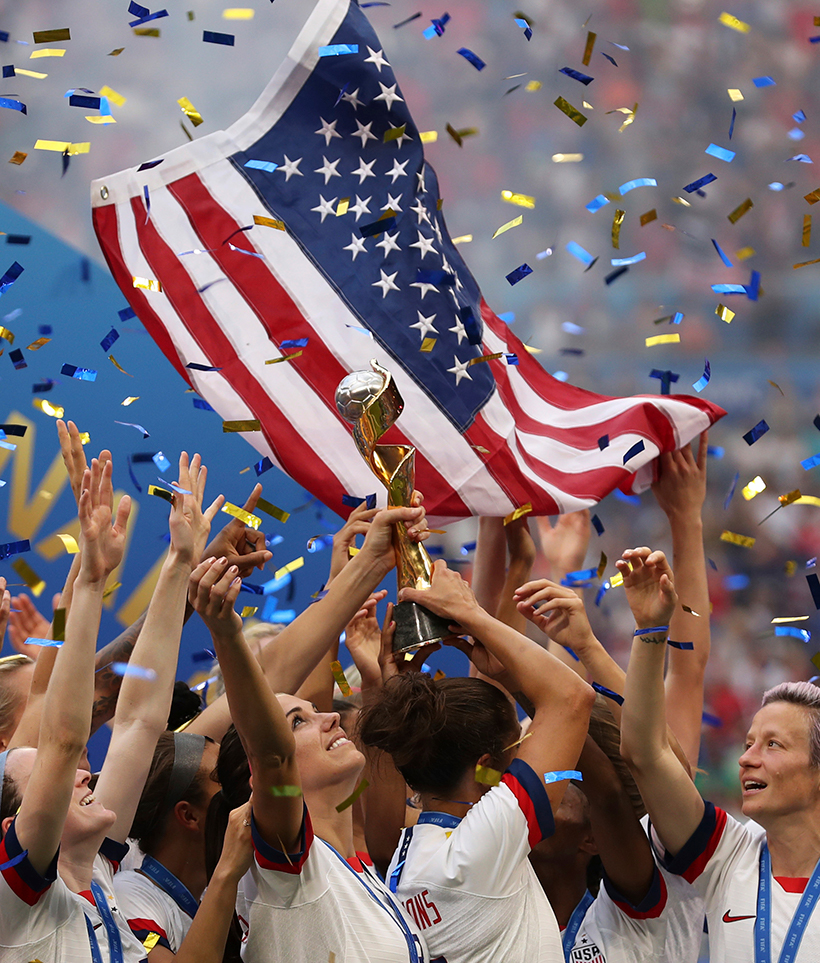 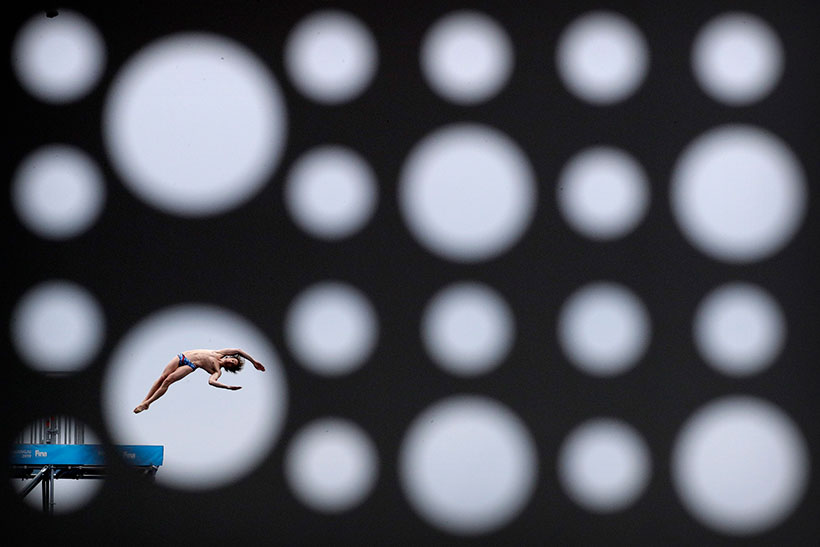 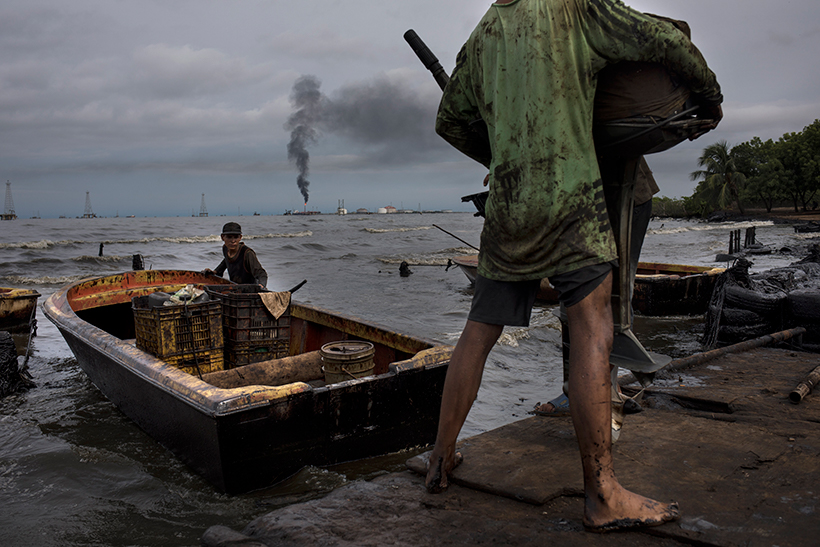 Fishermen covered in oil get their boat ready for fishing on Lake Maracaibo near La Salina crude oil shipping terminal in Cabimas, Venezuela, July 9, 2019. Nobody lives as closely with the environmental fallout of Venezuela’s collapsing oil industry as the fishermen who scratch out an existence on the blackened, sticky shores of Lake Maracaibo. AP PHOTO / RODRIGO ABD 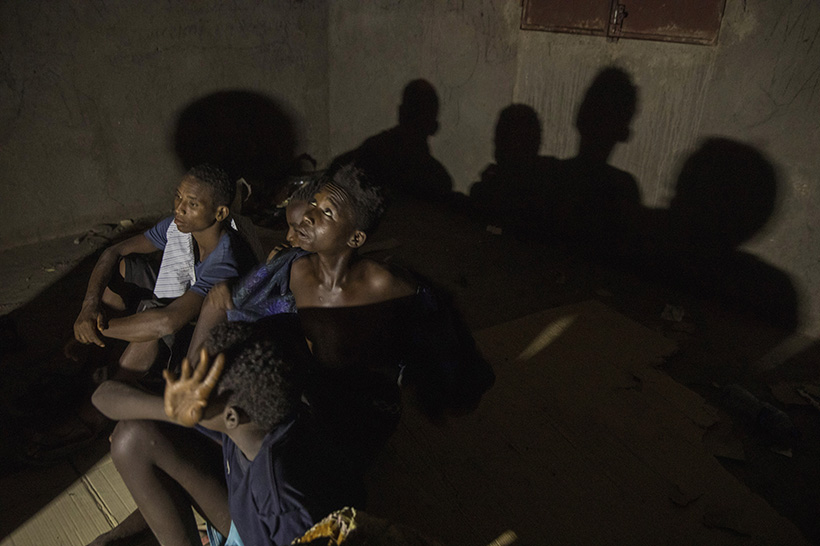 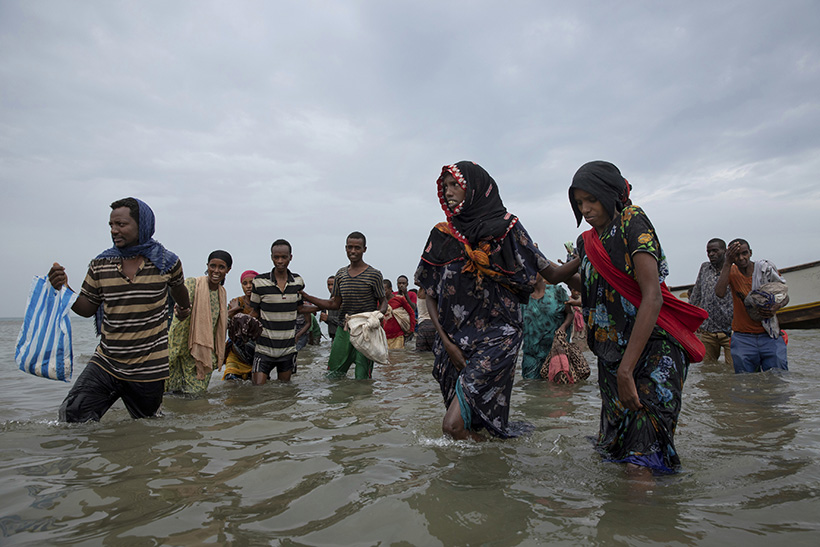 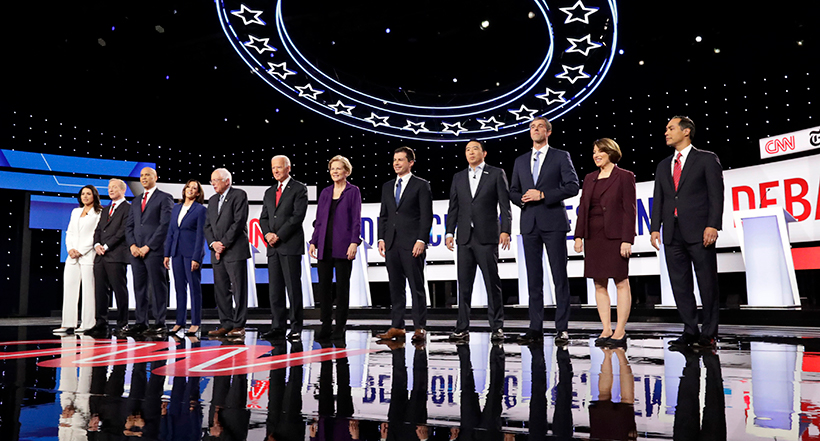 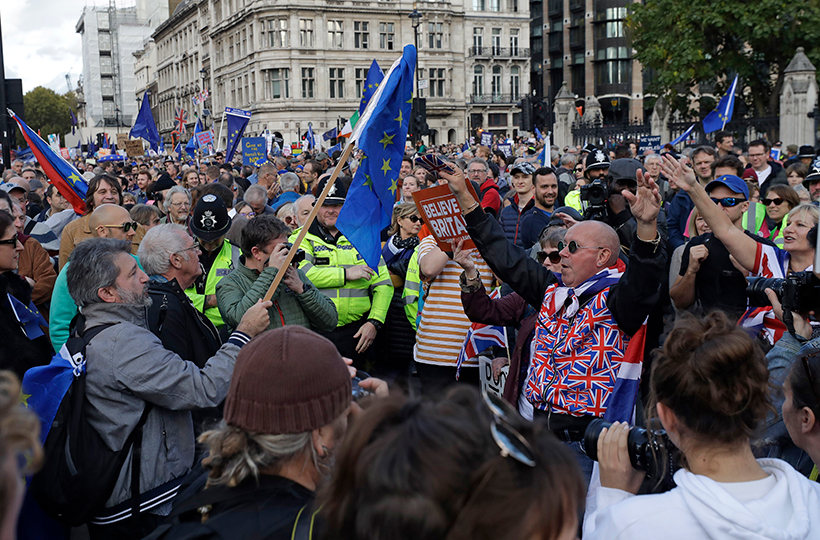 Anti-Brexit European Union supporters, left, in favor of remaining in the European Union, face off with pro-Brexit supporters in London’s Parliament Square, Oct. 19, 2019. The U.K. formally withdrew from the EU on Jan. 31, 2020. AP PHOTO / MATT DUNHAM 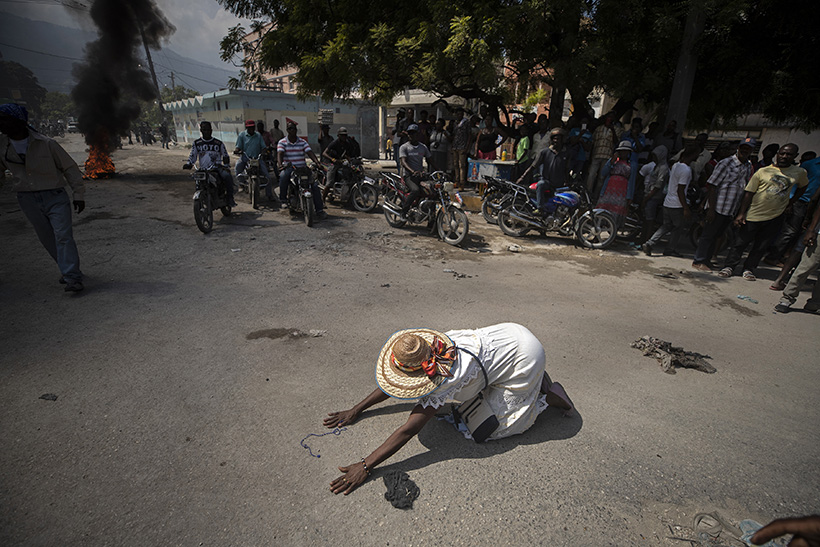 A churchgoer drops to the ground as she prays in the street near burning tires lit by protesters, during a march called by religious leaders in Port-au-Prince, Haiti, Oct. 22, 2019. AP PHOTO / REBECCA BLACKWELL 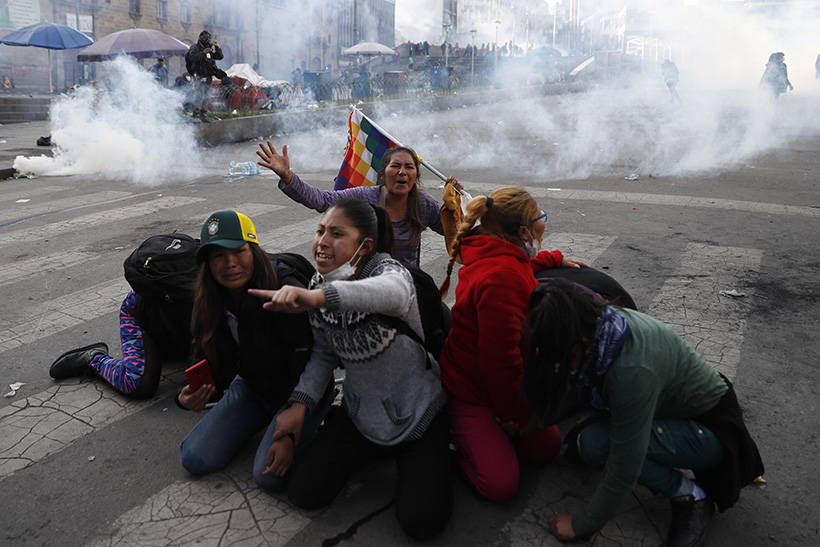 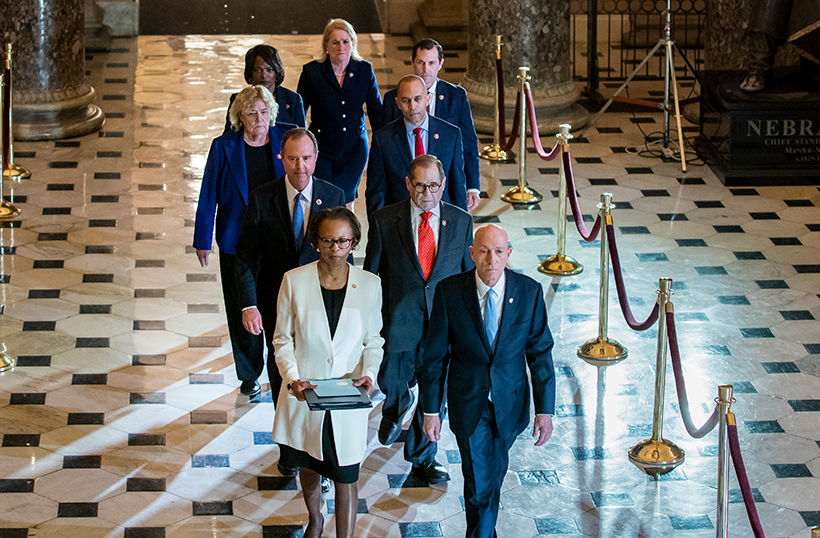 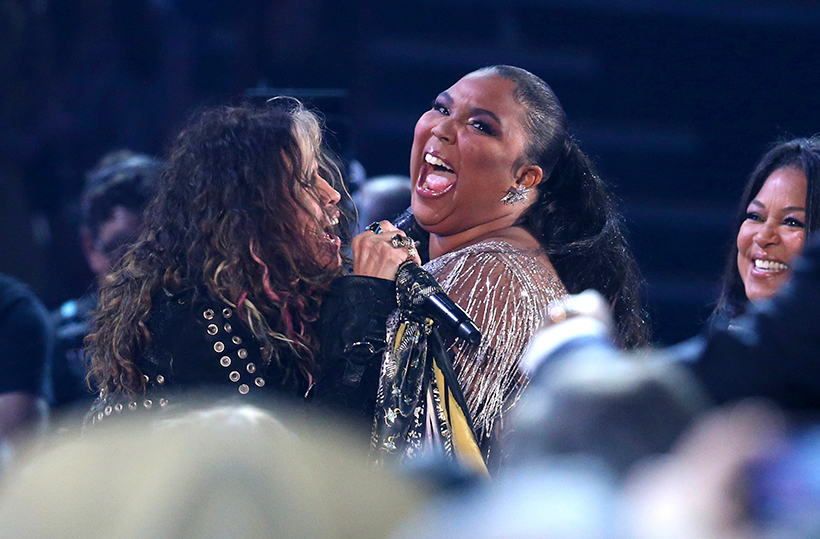 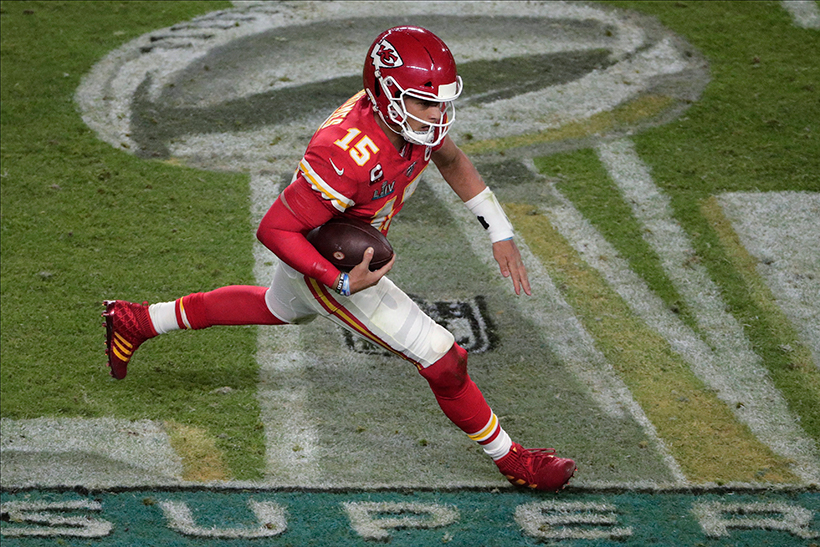 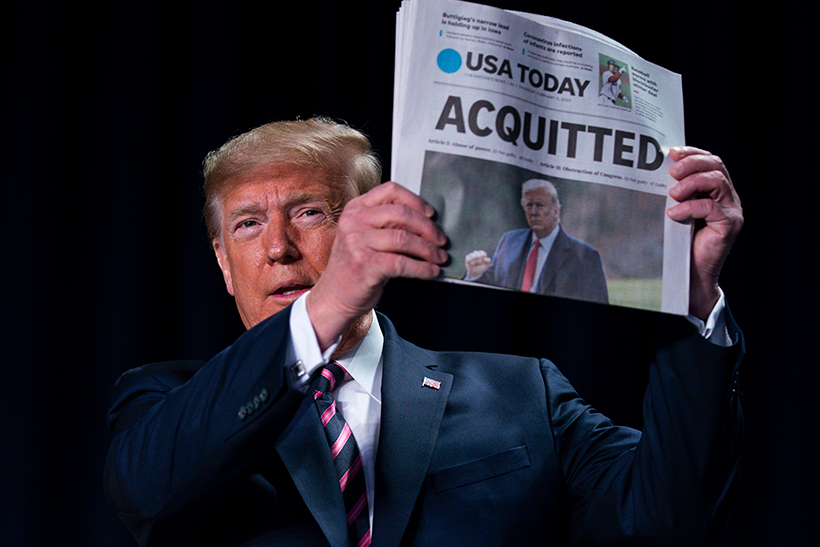 U.S. President Donald Trump holds up a newspaper at the annual National Prayer Breakfast in Washington, Feb. 6, 2020, one day after he was acquitted in a Senate trial on charges of obstruction of Congress and abuse of power. AP PHOTO / EVAN VUCCI 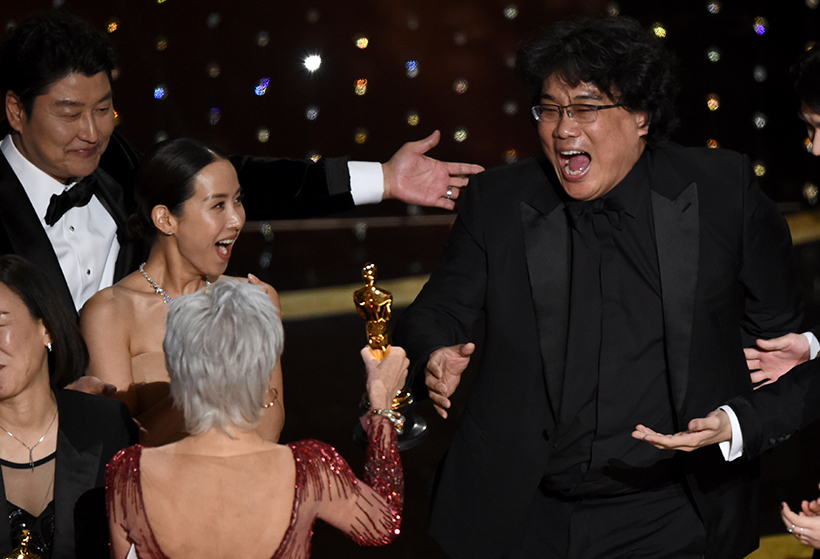 Director, co-writer and co-producer Bong Joon Ho, right, is presented with the award for best picture for his film “Parasite,” during the Oscars at the Dolby Theatre in Los Angeles, Feb. 9, 2020. At left are actor Kang-Ho Song and producer Kwak Sin Ae. AP PHOTO / CHRIS PIZZELLO 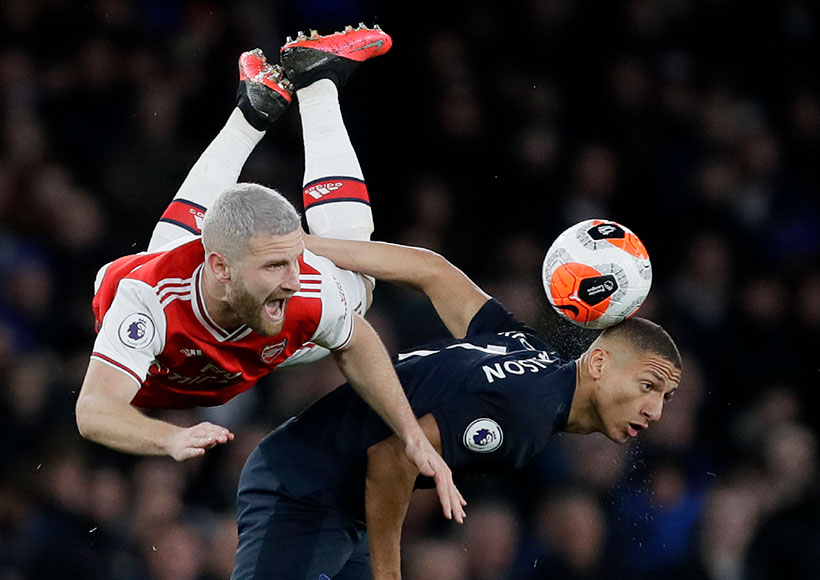 Judie Shape, behind glass, who has tested positive for the coronavirus, blows a kiss to her son-in-law, Michael Spencer, left, and daughter Lori Spencer as they communicate by phone at the Life Care Center in Kirkland, Wash., March 11, 2020. At least 30 COVID-19 deaths have been linked to the long-term care facility. AP PHOTO / TED S. WARREN 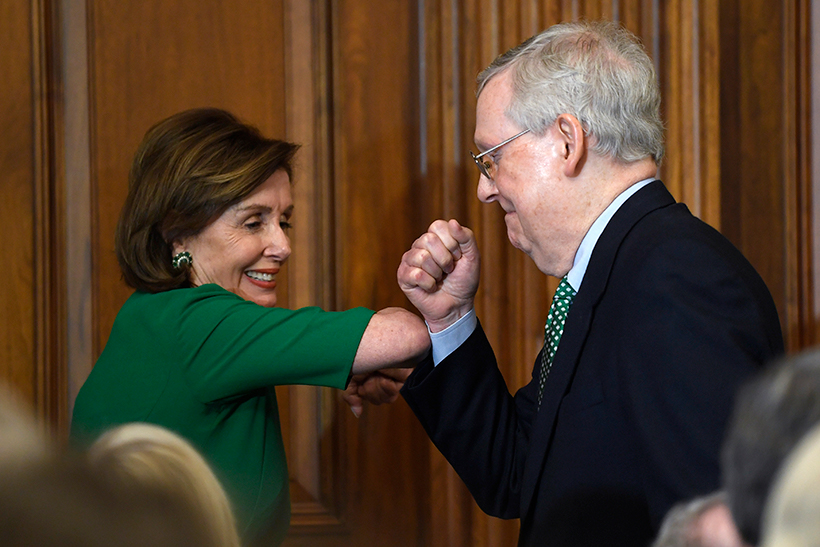 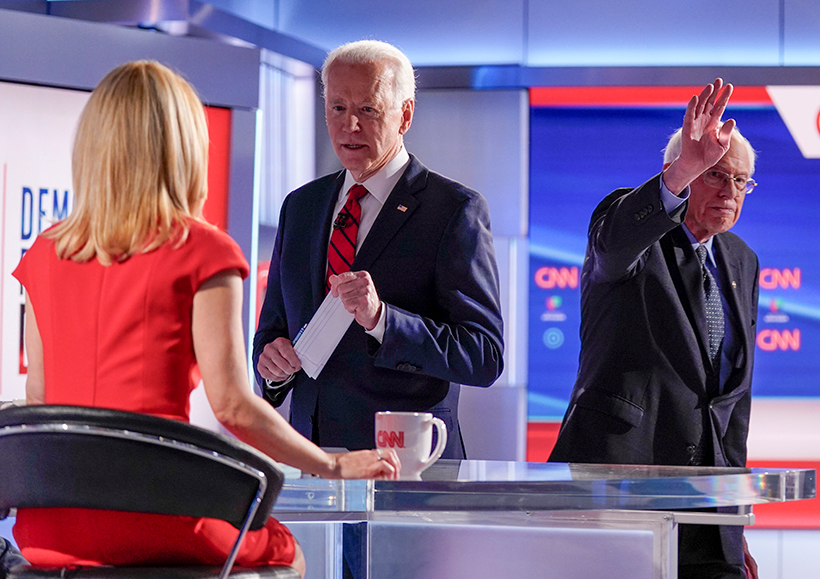 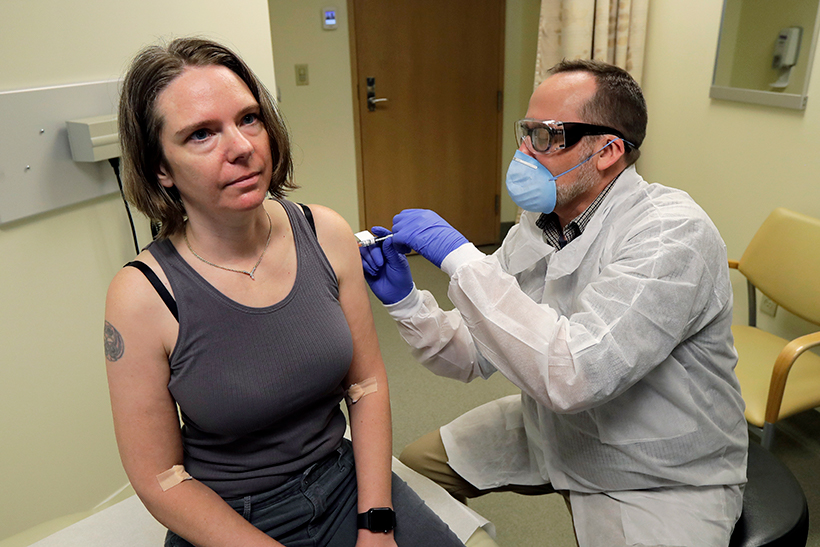 A pharmacist gives volunteer Jennifer Haller the first shot in the first-stage safety study clinical trial of a potential vaccine for COVID-19 at the Kaiser Permanente Washington Health Research Institute in Seattle, March 16, 2020. “We all feel so helpless. This is an amazing opportunity for me to do something,” Haller said before getting vaccinated. AP had exclusive access to the initial vaccine trial. AP PHOTO / TED WARREN

Italian medical personnel pose for portraits at hospitals in the Lombardy region cities of Bergamo and Brescia, and in Rome, during the coronavirus outbreak, March 27, 2020. AP photographers fanned out to photograph doctors and nurses on the front lines of the battle against COVID-19 during rare breaks from intensive care units. AP PHOTOS / DOMENICO STINELLIS, ANTONIO CALANNI, LUCA BRUNO

The AP has always delivered factual, compelling journalism with speed and accuracy, and 2019 was no exception. Our journalists across the globe covered a wide range of breaking stories in all formats, expanding the lens from spot developments to global impact:

Innovation, collaboration in news and business

In 2019, AP achieved a milestone in live underwater broadcasting by transmitting live video from 650 feet (200 meters) below the surface of the Indian Ocean without cables.

Chronicling a deep-sea research mission in the Seychelles, the team of AP staffers identified and developed technology needed for live transmission from underwater without cables, installed and tested the system at sea, and delivered live video and agency-exclusive news content from one of the most remote areas of the world. Their work strengthened AP’s position as an industry trailblazer and won several prestigious awards, including the Royal Television Society’s Television Journalism Award for News Technology and the International Broadcasting Convention’s Innovation Award for Content Distribution.

Several other notable examples of innovation and collaboration in 2019 include:

During these unprecedented and complex times, we understand the world relies on AP perhaps more than ever before. AP will continue to deliver.

As we have for 175 years, AP will advance the power of fact-based reporting, because we believe a world where more people know what’s happening around them is better equipped to face the challenges we share. 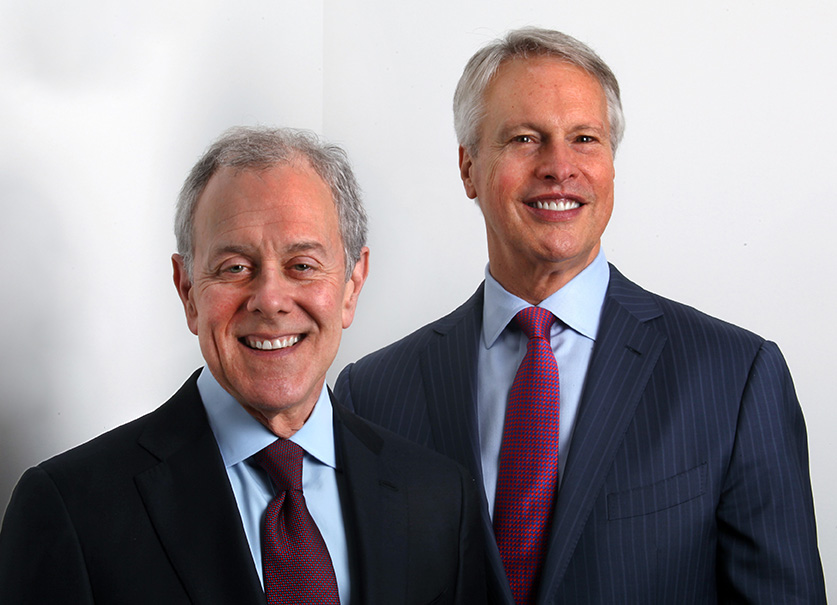 A look at 2019 through AP stats and figures